Super Yacht Charter brief:
OURANOS TOO super yacht (41m / 134.5’) (formerly Iliki V) was custom built by Italian shipyard Codecasa back in 1994. She was last refitted in 2007, and is normally based in the East Mediterranean offering luxury crewed yacht charters around the Greek Islands including Santorini, Crete and Mykonos as well as Cyprus and Turkey. Della Role Design team created her luxurious interior while the exterior styling of Ouranos Too is in-house work by Codecasa. She represents a fine example of the famous shipyard offering usual rich wood panelled interior. 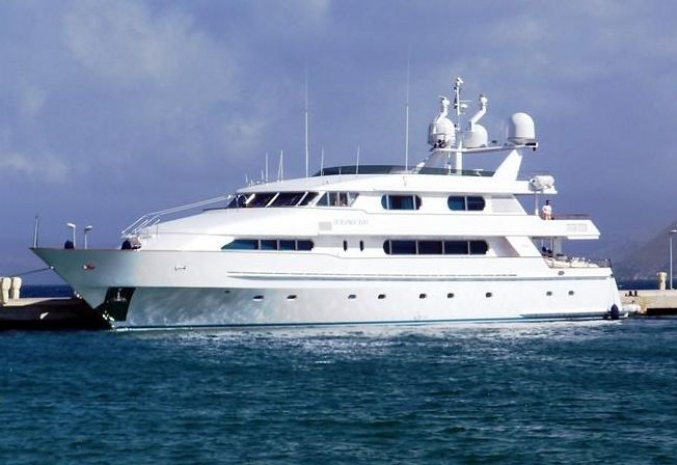 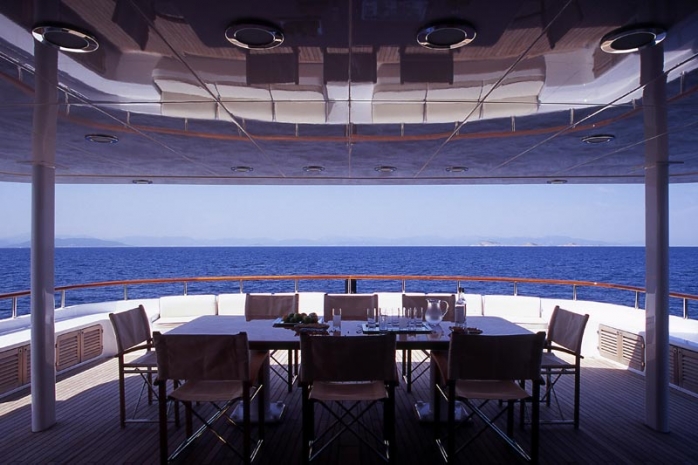 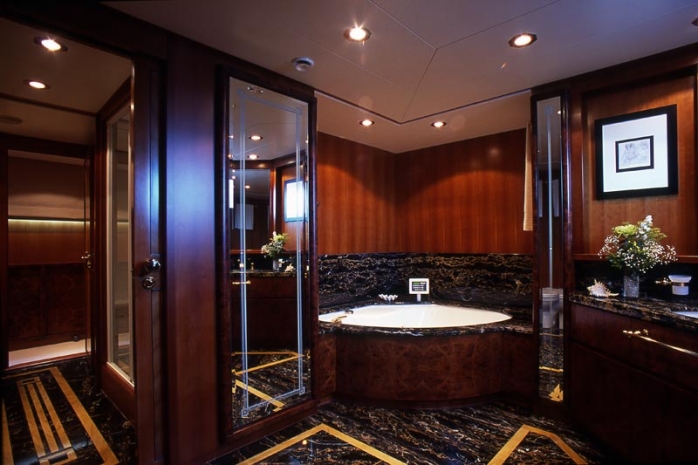 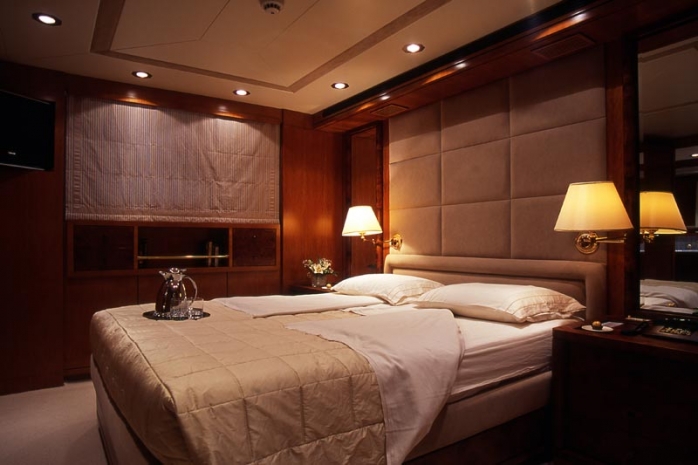 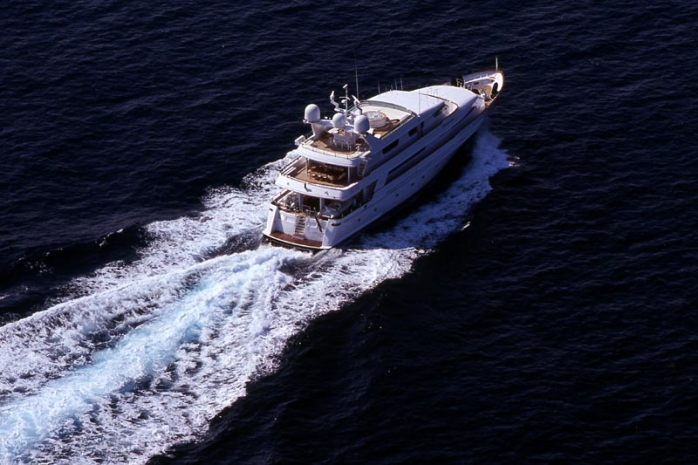 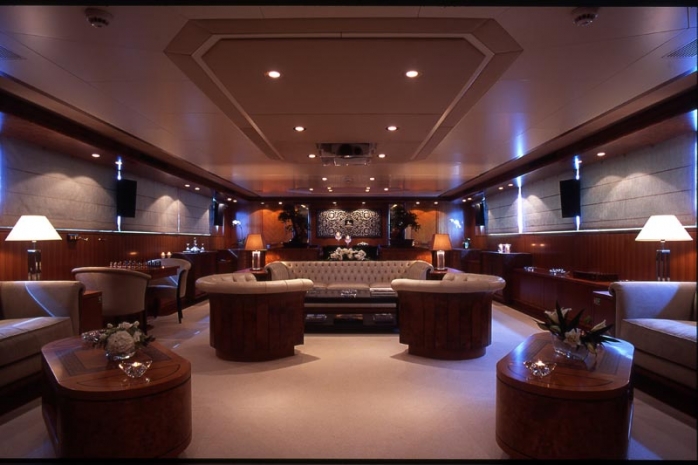 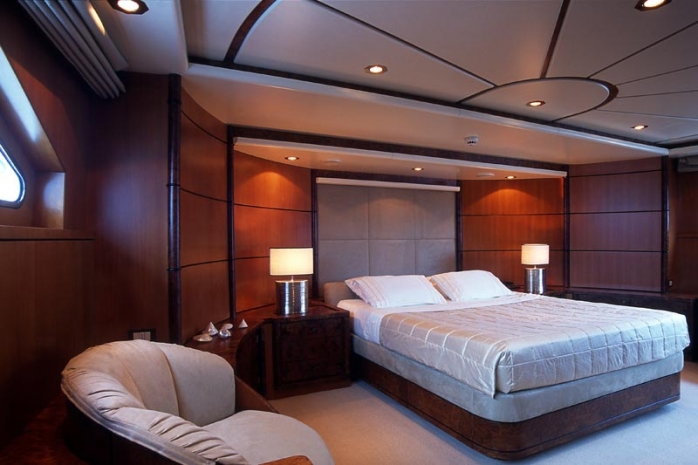 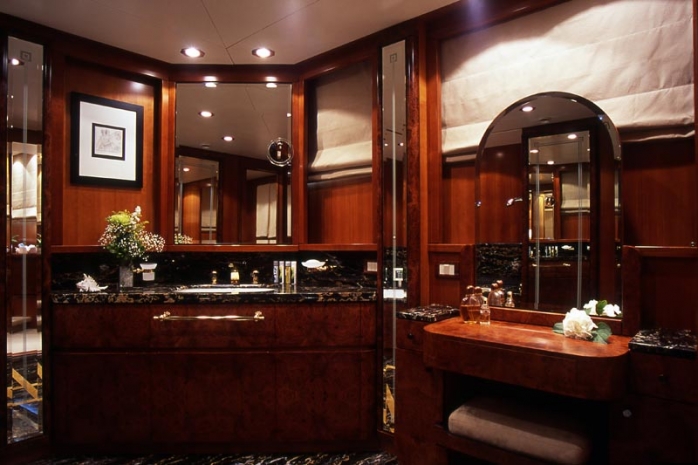 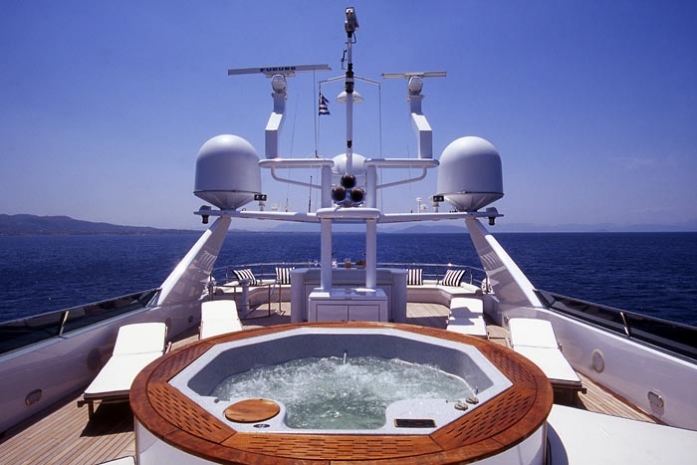 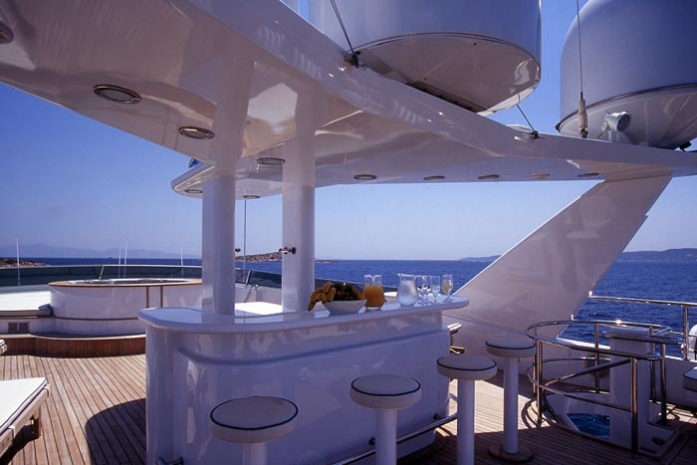 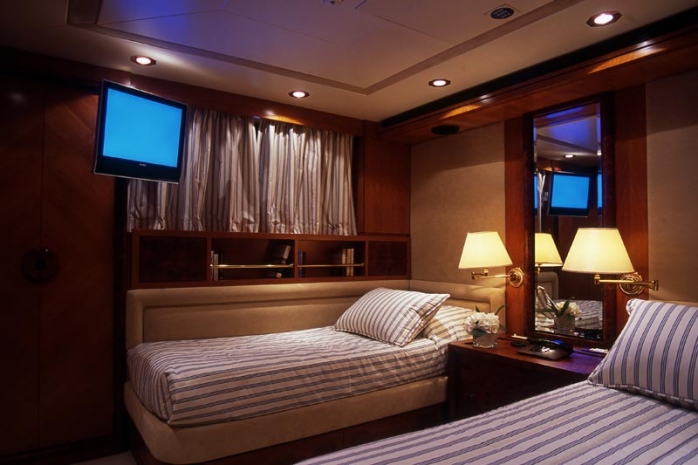 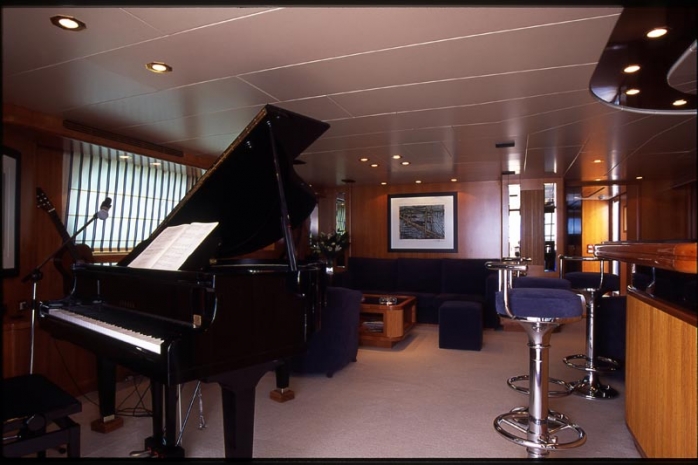 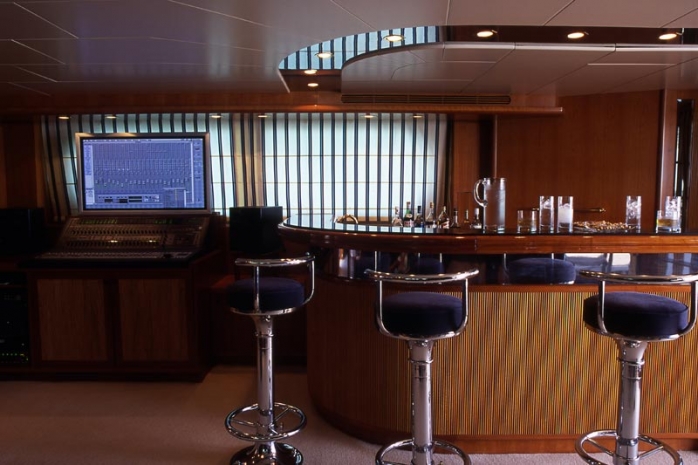 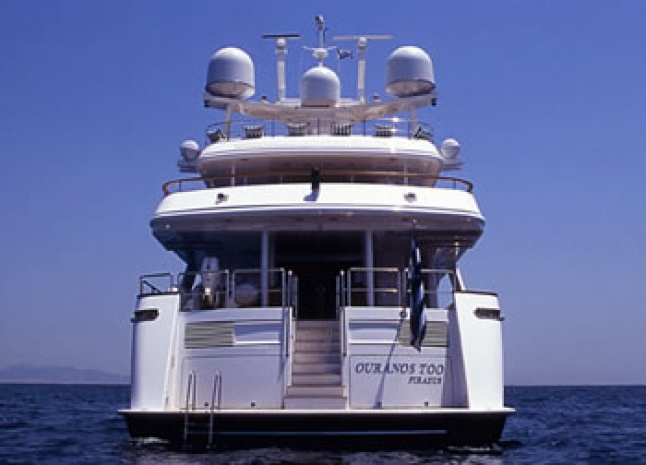 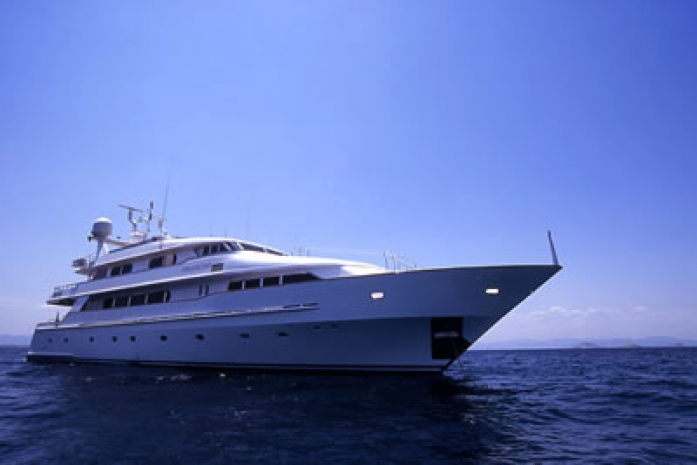 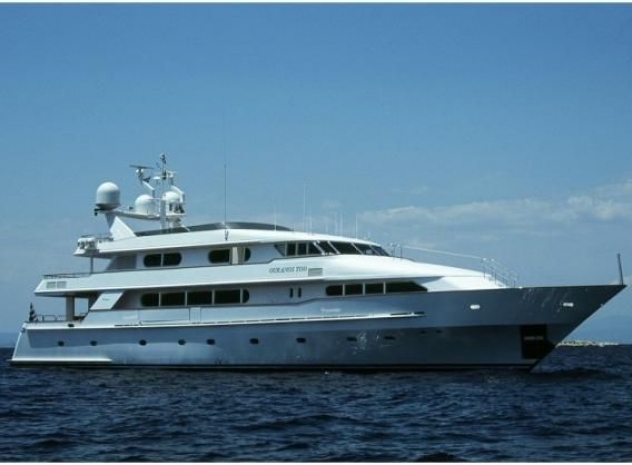 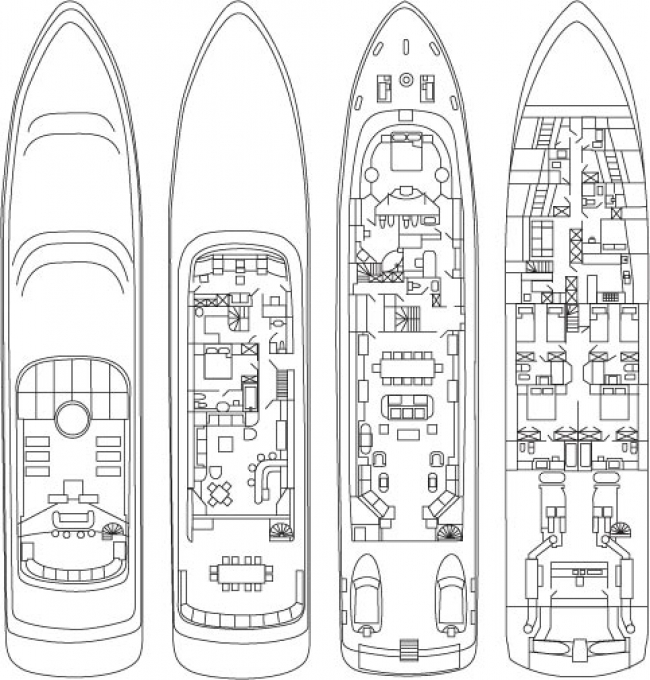 About Super Yacht OURANOS TOO:
Super Yacht Ouranos Too (41m / 134.5’) is a Cantieri Navali Codecasa luxury crewed motor yacht offered for yacht charters in Greece.  She can accommodate up to 12 guests in 6 spacious cabins and has an 8 member superyacht crew, including the captain Giannis Kozakis, and is usually offering high end silver service on board. During the refit in 2007, the yacht engines were overhauled and all soft goods, furniture and overhead decorations were replaced.  On top, latest satellite television with independent receivers, plus Sony PlayStations in each cabin, as well as Wi-Fi Internet, stabilizers for easier cruising, independent climate control systems and an overhead projector with drop-down theatre-style screen and blackout shades, which turns the main saloon into a virtual cinema, were installed.

Accommodation:
Super Yacht Ouranos Too interior layout normally sleeps up to 12 guests in 6 staterooms, including a master suite, 1 VIP, 2 double cabins, 2 twin cabins with 2 pullman beds.
She is also capable of carrying up to eight superyacht crew members including the captain onboard.

The Master cabin
It has a king size bed, shower and toilet.

Double Guest Cabins
3 Guest cabins including the VIP have a queen size bed, shower and toilet.

OURANOS TOO is fully air conditioned throughout.
Crew has a separate heads and shower.


Currently there is no Sugessted menu for this boat. Please contact us for more details!

OURANOS TOO (41m / 134.5’) super yacht built by Italian Shipyard Codecasa. She is normally cruising around the Eastern Mediterranean and is offered for luxury crewed charters within Greek Islands, Turkey and Cyprus. This 41m luxury motor yacht can accommodate up to 12 guests in 1 x master suite, 1 x VIP double, 2 double and 2 x twin cabins. Thanks to hear twin super yacht engines offering a total output of 4.560hp, she can cruise at speeds of around 13kn and reaches a maximum speed of around 15kn. Her best features are unique silver service, excellent crew and great value for money given the levels of accommodation offered, her stylish presence and latest entertainment equipment on board.

East Mediterranean based super yacht Ouranos Too, offered for luxury crewed yacht charters in Greece, can accommodate up to 12 guests on board.

Super yacht Ouranos Too has a good selection of water sport toys on board.

Super yacht Ouranos Too has a great choice of entertainment facilities.
All cabins and salon are fully air conditioned and with their own high tech entertainment systems.

You will also find the following on board;

You may also be interested to check out one of the following boats:


Disclaimer: This web page and the document are not contractual. The yacht details are displayed in good faith and whilst believed to be correct at all times, they are offered for informational purpose only and cannot be guaranteed. We do not warrant or assume any legal liability or responsibility for the accuracy, completeness, or usefulness of any information and/or images displayed. All information provided are subject to change without notice and are without guarantee. A professional yacht charter consultant will discuss each charter during your charter selection process. Starting prices are shown in a relevant currency for a one-week charter or one day charter, unless stated otherwise, and may or may not include local VAT. Exact pricing and other details will be confirmed on the particular charter contract. To get a detailed quote and full information on your chosen or preferred yacht, please fill out the charter enquiry and expect an offer from us shortly.
All rights reserved by SuperSailYachts.com © 2013