Published by Editorial team on 23rd of September 2015

Sales and Marketing Director of Heesen, the famous Dutch Shipyard, Mark Cavendish, presented the following information on the Project NOVA, The Sounds of Silence, during their Press Event earlier this morning at the Monaco Yacht Show.  … 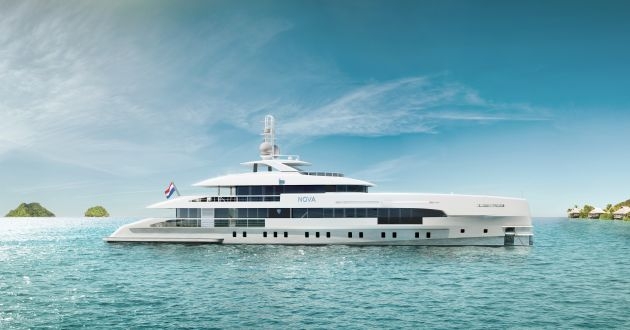 Good morning ladies and gentlemen, my name is Mark Cavendish,

I’m the Sales and Marketing Director of Heesen.
A very big welcome to you all on this lovely sunny morning here in Monte Carlo.

An especially big thanks to you all for getting up so early to be here at what I believe is the first press conference of show – thank you. I would like to start by playing you a short movie, it is the world premiere of the Heesen Brand Movie. I am here to introduce you to Heesen’s latest technology, the new hybrid 50m motor yacht - Project NOVA.

First of all NOVA is a Fast Displacement Hull, a concept we were the first shipyard to develop with the launch of GALACTICA STAR in 2013.  Since then we have gone on to build the 42m ALIVE in steel;the 50m SIBELLE in aluminium; and recently the 55m steel AZAMANTA,  all with Fast Displacement Hulls. Project NOVA, unlike GALACTICA STAR is not designed for exceptional high speeds but instead uses the ultra efficient and easily driven hull form at the lower speeds typically associated with traditional displacement hulls but, with vastly lower fuel consumption.  I repeat that – vastly lower fuel consumption. To give you an idea, NOVA at 12 knots has a fuel consumption of 98 litres per hour (excluding generators) and at 10 knots this reduces to a staggering 57.5 litres per hour – this for a yacht 50m long, displacing 315 tons and with a Gross Tonnage of 499. 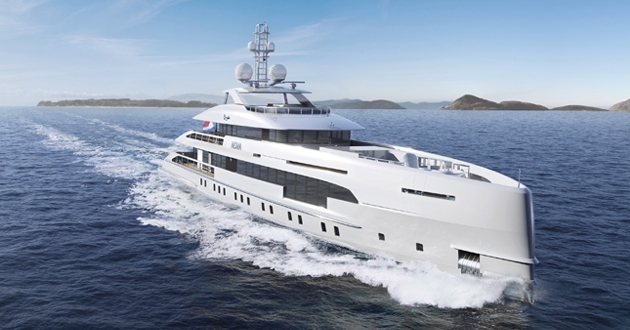 Coupled with this is a maximum speed of 16.3 knots, which is no slouch for a displacement yacht and demonstrates that we haven’t achieved this performance by installing a pair of outrageously small engines! All this is achieved with a pair of MTU 12V 2000 M61 engines, 600 kW each which I agree are smaller than typically fitted on a yacht of this size but this just illustrates the remarkable efficiency of the Fast Displacement Hull form.

I will leave you with 2 more statistics before I move on to the other remarkable feature of NOVA:
she has a cruising range (at 12 knots) of 3,750 miles and
this is achieved with a fuel capacity of just 45,000 litres.

By way of comparison your average 50m steel full displacement motor yacht of less than 500 GRT would typically have two 1,100 kW main engines – nearly twice the power, would have a maximum speed of maybe 16.5 knots, a fuel consumption of more like 130 litres per hour at 12 knots – 30% more and would require 60,000 litres of fuel for the same range – 33% more fuel!

By adding two water cooled DC electric shaft motors of 127 kW each NOVA can cruise at speeds up to 9 knots using the generators alone.  The main engines can be switched off and do not need to be used.  At this speed the consumption is predicted to be a staggering 45 litres per hour! But, fuel consumption isn’t everything, noise, as we shall come on to later is of great importance too. 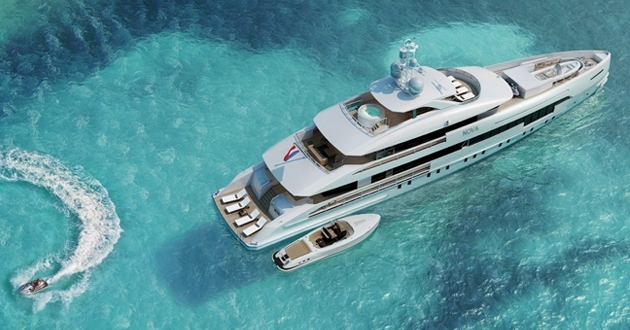 By way of illustration:
In the Owner’s stateroom the decibel level whilst underway with the main engines, in other words ‘normal cruising’ is predicted to be 50 dB(A)  whereas at 9 knots with the hybrid propulsion system this will drop to 46 dB(A).  In the Main Salon this will drop from 62 dB(A) to 50 dB(A); In the dining area from 60 to 48, in the upper saloon from 58 to 46 and in the guest cabins also from 58 to 46.
In other words the owners and guests will enjoy (to quote from earlier) a vastly quieter environment.  Imagine for a moment leaving harbour early in the morning without waking the guests with the main engines switched off, or cruising at night, almost as quietly as if you were at anchor.  This is surely the dawning of a whole new age in yachting…

There are other advantages of the hybrid system too.
For instance on longer passages the shaft motors can be used as generators to provide the hotel load on board, meaning the generators can be switched off with a consequent saving in fuel, this is feasible across a wide range of speeds up to 15.7 knots max - main engines only – no generators. Then there is the option of boost mode where the main engines plus the shaft motors powered by the generators can all be brought into service.  This will give an additional 0.6 knot bringing the maximum speed to 16.3 knots, at this speed the consumption will be around 310 litres per hour –still not bad I think you will agree considering the size of the yacht and the speed achieved.

So far I have only talked about technical features: fuel consumption and noise levels.  It would be remiss of me not to mention her more aesthetic features.  From the illustrations her most striking feature is of course her plumb bow and spray rails and her fixed swimming platform aft with wide sweeping stairs leading to the main deck.  Drawn by Frank Laupman at Omega Architects the brief to Frank was to create a modern, innovative yacht with striking lines and most importantly, lots of glass.

We wanted to build a yacht closer to a beach villa in style with a more intimate connection with the sea and the nature around you.I think you will agree we have achieved this with her fantastic panoramic glass walls on the main deck and upper deck.Next the accommodation layout.  We wanted to optimise this to include features often asked for by today’s owners, we included a dedicated gym with separate hammam accessible from the guest corridor and the main deck.  We included 6 staterooms including a full beam VIP stateroom on the lower deck, as well as the traditional owner’s stateroom and main saloon/dining on the main deck and the upper saloon above.

The interior design by Sinot design echoes the beach style theme of the exterior, with clean, modern contemporary lines with much use of natural fabrics and materials and emphasising the vast amount of natural light flooding into the interior. We believe NOVA with her innovative technology, striking lines and dramatic interior design projects Heesen into a new era. 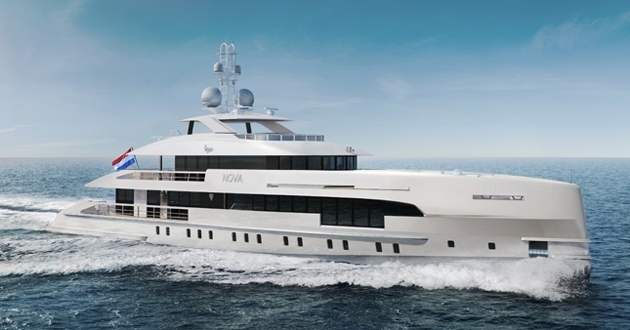 In case you are interested in chartering one of these or similar yachts or wish to consider purchasing one of the models which are offered for sale, do let us know by filling out the CHARTER REQUEST FORM or send us an email to charter@supersailyachts.com now.

Disclaimer:  The information provided here are made as a general guide only, made to give a broad description and latest news of the shown yacht or yachts. They are not intended to constitute part of an offer or contract. The details of the luxury yacht or yachts displayed on this page are made merely for informational purposes, and the yacht or the yachts are not necessarily available for yacht charter or for sale, nor is she or they represented or marketed in anyway by SuperSailYachts.com. All details, including any photographs, measurements, plans and specifications mentioned, are given as a guide only and should not be relied upon for the purchase or charter of this yacht. The copyright of all details, photographs and deckplans remains the property of their rightful owners or their chosen representatives.

This news refers to:

An exclusive motor sailor with a sublime 7.10m tender charters between Split and Dubrovnik!

Refitted in 2018, 2019 and 2020, the luxury sailing boat SAN LiMi is a very rare and exclusive charter yacht based in the Adriatic.  Custom built in 2007 and with a Jacuzzi on the fly as well as in master suite, new teak deck, new carpets & excellent crew of 5this is the boat to explore Southern Dalmatia …

Own a bespoke explorer yacht from 70-185ft built by a recognised USA brand !

Seeking to provide all answers to an aspiring owner, BERING YACHTS of USA seek to build semi-custom explorer yachts to highest industry standards and satisfying all individual requirements of any customers that come forward. Order your own new Explorer Yacht project with SuperSailYachts now ...


A 48m classic Luerssen superyacht available from 130,000 Eur/week in Turkey !

Refitted only this month, the 158ft megayacht VETRO, is now available for exclusive private charters out of Bodrum.  With a captain and 10 other crew members, you can have an exceptional 5-star luxury yacht charter holiday in one of the most exclusive and naturally beautiful parts of the Mediterranean …

Lastminute charters in the Exumas is covid-19 free and highly recommendable!

Flagship of the French builder when it comes to power boats, the COLETTE is fully equipped Lagoon 630 powercat offering huge interior and deck spaces for an ideal social distancing or self-isolation yachting holiday in the Caribbean. Based in Georgetown, she is the boat to explore the Exumas …

For any bookings before end of March 2021, recently refitted 79ft luxury cruiser-racer superyacht ELISE WHISPER offers 10% discount. Look forward to a great summer 2021. Available in Italy or France, including Sardinia & Corsica from May – October, she offers a deal not to be missed out on ...

Mr Eriksson and his business friends chartered 7 different motor yachts in the range from 70-90' in various locations across the Mediterranean. We are looking forward to arranging new boats during summer season 2012 and winter season 2013

”
All rights reserved by SuperSailYachts.com © 2013